Home » Blog » How We Developed Web Application on MS Azure

Today the Internet has a significant number of live web cameras available for everyone. Web cameras allow users to view video streaming in a real time or get specific frames upon request. However, the cameras can’t store video for some time period. This is obvious as calculating resources (disk space on server and processor time allotted for request serving) are needed for video storing or photo collections storing. We decided to implement this functionality in our project Enterra WebCam Viewer.

Enterra WebCam Viewer – is a web application with the following features:

The features described above are features for a user with “Guest” rights. Cameras can’t appear in the application by themselves. Someone should add them. Let users add them. For these purposes we have features for users registered in the system:

Video archive for a camera is formed from the frames taken from the camera with a certain interval. For example an ordinary video is a sequence of frames with frequency of 24-25 frames per second. Full value video record with such frequency requires very substantial consumption of processor time and disk space. Besides unlikely there is a practical necessity to record video with such frequency from web cameras. Thus, user should have an option of specifying own frame frequency, the frequency should not be set any lower than 1 frame per second. Besides user should have an option to stop camera record without its deletion.

From the features description one can conclude that we need substantial calculating resources. First of all, the cameras should constantly be served, frames should be taken from them and frames should be stored. Secondly, clients will constantly request videos and it means that server should make frame selections and send them to clients. The server platform should be scalable. That is why the choice of the MS Azure platform was clear and undoubted.

We used Silverlight considering interactive nature of the application itself. It is known that MS Azure has several ways of data storing. We used SQL Azure for two reasons:

Below is a final list of software requirements to start the work:

Enterra WebCam Viewer – is a client-server application, which has the following division of layers:

The architecture described above is implemented with the help of our Enterra.Data component, which is used both on client and server sides. That is why we had to port Enterra.Data to Silverlight. It didn’t arise any problem or difficulty for us.

Data base scheme corresponds to object model and is given in the picture 1. 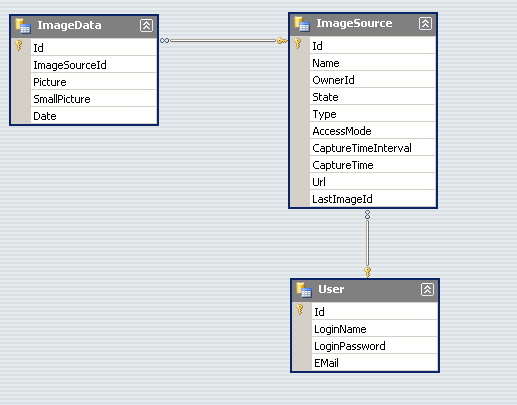 As it has been already said in the architecture description, client interacts with server by using IDataProvider interface. It means that our server is an implementation of IDataProvider. Let’s show examples of the most significant IDataProvider methods:

//getting identificator for a new object of the specified type.
object GetNewId(Type type)

It is clear that IDataProvider implementation on client should transfer request by web service methods. Instead of creation of several methods on the web service, our web service publishes one method. Call for all the methods of the server is done using this method. Its signature is below:

There is a number of advantages in creation of only one web service method:

We solved this problem the following way:

We conclude that we used component with synchronous request model in the asynchronous environment.

The main task of server is to constantly get images from web cameras with the “record” states and store them in the data base. Process which initializes new event of camera processing, should be constantly working on server. For example, in Windows Server 2003 it can be windows service which requires method of camera processing with a certain interval. In MS Azure the task is solved by writing a cycle with request of the processing method with a certain interval. Further the code should be launched under worker role.
The general algorithm of camera processing in terms of our object model can be written as follows:

Let’s comment on “require record of the next frame” words from the 1st item above. Each ImageSource has a frame frequency and stores date and time of the last frame taken. Based on these properties and current time one can easily get a necessity condition of taking a frame in a certain time period.

Let’s note that when creation ImageData with main image we also save it’s scaled-down copy. This is necessary to allow a client request for several images without substantial load on communication channel.

Thus, we developed web application, tested it and debugged it in “warm house conditions” and now it’s time to deploy it on MS Azure.

We create data base using SQL Azure tab on the personal page (Pic. 2) 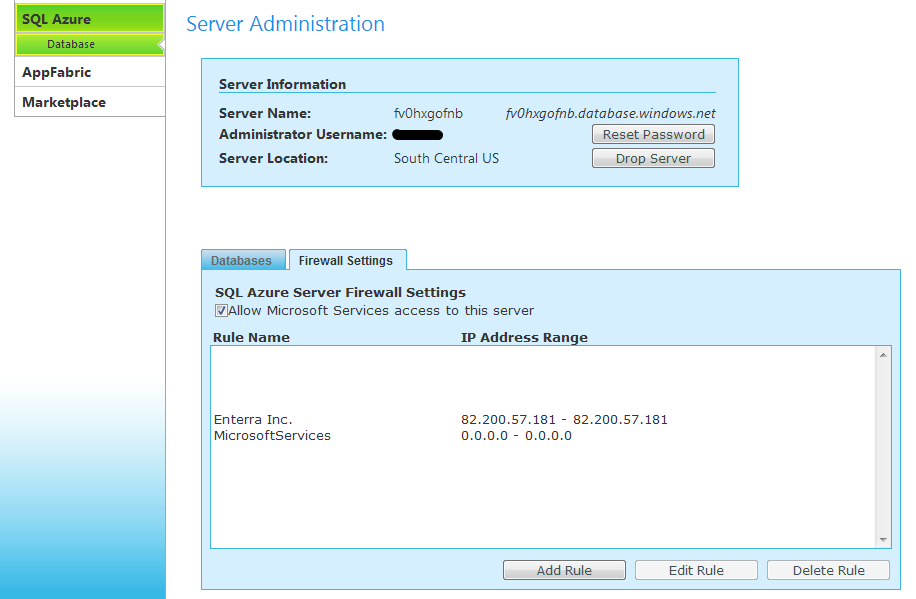 There it is necessary to make rules for Firewall. In this situation the «Enterra Inc.» rule allows access to SQL Azure from our IP address. Also Microsoft recommends installing “Allow Microsoft Services access to this server”.

Command line examples for connecting to SQL Azure, are given below.

To create data base structure using the script, it is enough to do the following command:
SQLCMD.EXE -U [email protected]_name -P password -S server_name.database.windows.net -d db_name -i filename

Do you like the article and want us to develop your project? Feel free to contact us here!